Scathing Review of Nintendo Wii U

I bought a Nintendo Wii U for one reason and one reason only, and that’s to play and beat “Super Mario Bros. U.” I’ll probably end up returning the console after I’m done, because that’s how horrible the Wii U actually is.

Do you live in Europe and want to access 18-rated content on the Wii U eShop, including trailers? Unless its between 11pm and 3am, you’re out-of-luck. Nintendo’s response when questioned:

“We have thus decided to restrict the access to content which is unsuitable to minors (PEGI) to the 11pm - 3am time window.”

I have an idea: parental controls. Time restrictions will only enrage your customers—the adults who purchased your system and do not want to be treated like children. Good thing this policy is not slated for the US.

Ars Technica reports on the end of Nintendo Power magazine, and how the final episode pays homage to its beginnings: 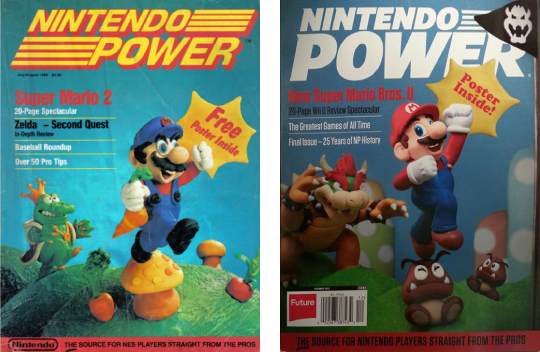 Back in August, when I was the first to report that Nintendo Power would be ceasing publication at the end of the year, I was largely able to compartmentalize my personal feelings about the move in favor of reporting on the facts. But today, when I saw the above image of the magazine’s final cover (left)—one that pays loving homage to that iconic Issue 1 cover from 1988 (right)—it really hit me how much the death of Nintendo Power represents the end of an era.

I still remember the first issue of Nintendo Power magazine. Of all the issues I had, the first was the only one that ever stuck around.