Why Verizon Sides With Samsung Over Apple

FOSS Patents has published a great article on Verizon’s stance regarding Apple’s defense maneuvers filed against Android handset makers Samsung and HTC. From the article:

Verizon, the largest U.S. wireless carrier, implores the United States District Court for the Northern District of California to deny Apple’s request for a US-wide preliminary injunction against four Samsung products (the Infuse 4G, Galaxy S 4G and Droid Charge smartphones, and the Galaxy Tab 10.1 tablet computer), arguing that such a decision would run counter to the public interest as it “would hinder Verizon Wireless in developing and deploying its next generation high-speed LTE [fourth-generation] network, the job growth dependant [sic] on that network, and will undercut key public policy goals, including expansion of American’s [sic] access to broadband networks and faster communication with emergency personnel.”

I am not sure how much good Verizon’s request will do in the legal arena, but I read it as “Verizon has bet big on LTE, and without these devices we’re screwed.” Then I came across this:

However, it remains to be seen whether the judge will believe that the market-leading carrier represents the public interest, given that Verizon’s objective of commodotizing smartphone technologies is transparent and that the same California-based federal court has in its records for another case, Oracle v. Google, a document that shows Verizon and Google promised each other unspecified favors, potentially anti-competitive ones since they did not document them in writing.

I would think that Verizon prefers Android over iOS for the simple fact that they can lock down the phones, brand them with their own logo and preload them with crapware, something not possible with the iPhone. Apple’s stance from the beginning has been that they control the hardware and software, and the phone companies are just the pipes. This view is inline with how we view terrestrial phone services and broadband internet today, but something new to the mobile space, and I am sure it makes Verizon uncomfortable.

John Paczkowski from AllThingsD asks “What Are Apple’s Icons Doing on Samsung’s Wall of Apps?”

Consider the wall of apps in this photo of the company’s new shop-in-a-shop in Italy’s Centro Sicilia, which appears to feature not only the iOS icon for Apple’s mobile Safari browser, but the icon for the company’s iOS App Store — three instances of it. 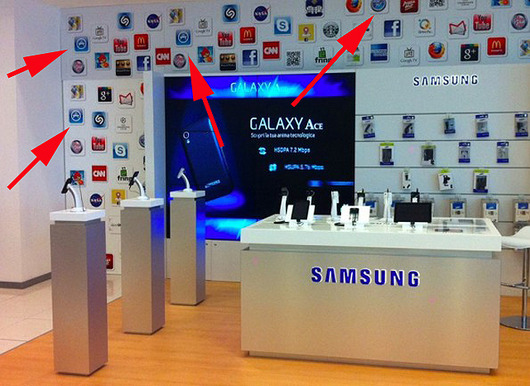 I am willing to bet that this task was outsourced to an external company, but wouldn’t you tread lightly knowing that Apple is accusing you of copying their designs?

Josh Rosenthall published an informative article on Edible Apple about Samsung using RAND (reasonable and non-discriminatory) patents against Apple. From the article:

Because Samsung’s patents are part of an industry standard, it must be licensed equally to parties implementing the standard without discrimination. If Apple implemented an industry standard without licensing the applicable patents from Samsung, it makes sense for Samsung to pursue a license deal from them. But using these patents to defend against Apple’s existing lawsuits is like fighting a forest fire with a water pistol; just plain confusing.

Posted by Michael Bartholomew on Sat, September 10th, 2011 at 2:50pm EDT
It seems that ever since Apple released their second generation Apple TV, people have wondered if it would officially support 3rd-party apps. The logic goes that since it is now built on iOS, why not follow in its siblings' (iPad, iPhone, iPod Touch) footsteps. And why not? Whether your a cable-cutter, a wannabe cable-cutter, or someone looking at adding additional functionality to your Apple TV, officially supported apps seem to make sense.
Read More...

According to an article on The Register, Apple’s iCloud service is rumored to run jointly on Amazon’s AWS and Microsoft’s Azure. I cannot help but wonder if Apple is relying on established, reliable vendors for the initial iCloud launch, and later migrating the service over to their data center in North Carolina when they feel it is ready.