The Outdated and Abandoned Droids to Avoid

Are you looking to pick up a new Android phone, but concerned that your phone may never see an OS update moving forward? If history repeats itself, there’s a good chance your Android phone will stop receiving updates within two-years, in contrast to the iPhone which receives OS updates for the first three-years. Michael DeGusta posted an analysis of existing Android and iPhone models, and mapped out when their installed OS was current or outdated. From a simple glance, it is obvious the iPhone is easily the most supported and phones from Motorola are the most neglected.

If the rumors are true, YouTube is looking to enter the online video distribution market for professional content. From the Wall Street Journal:

YouTube is trying to become a next-generation cable provider overseeing dozens of free online “channels” with professional-grade shows, people familiar with the matter have said.

I wonder how existing cable companies—many who also offer broadband internet—will react to YouTube’s rumored venture. It also has me wondering how this will work for users already restricted with bandwidth caps, such as Comcast and AT&T.

Samsung Mobile Unpacked 2011, originally slated for October 11th, has been cancelled. Samsung passed along the following comment from their HQ in Korea to Stuff:

Samsung and Google decide to postpone the new product announcement at CTIA Fall. We agree that it is just not the right time to announce a new product. New date and venue will be shortly announced.

Update: Ina Fried from AllThingsD has posted and updated statement from the companies announcing this delay is out of respect for Steve Jobs. From the article:

We believe this is not the right time to announce a new product as the world expresses tribute to Steve Jobs’s passing.

Today we’re very excited to bring real time data to Google Analytics with the launch of Google Analytics Real-Time: a set of new reports that show what’s happening on your site as it happens.

The new feature works exclusively in the new interface, and has only been enabled for a subset of the user-base. If you would like to have it enabled on your account, please visit https://services.google.com/fb/forms/realtimeanalytics/ 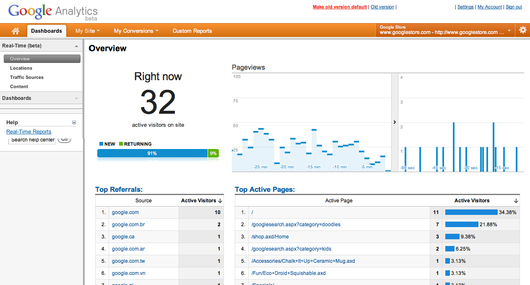 IsComputerOn has a great writeup on the evaluation of submissions for this year’s Google Summer of Code (GSoC) effort. From the article:

[…]the projects which passed evaluation were:

Please head on over and read the full writeup and congrats to Haiku and the student contributors!