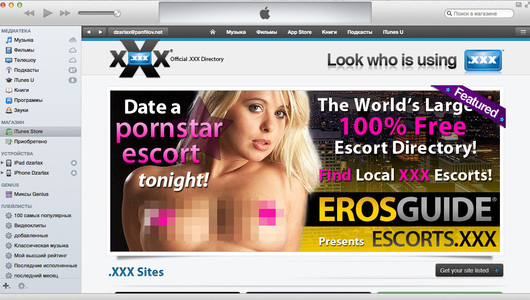 Apple has opened the iTunes Store to 56 additional countries, bringing the official tally to 155. From Apple’s Press Release:

Apple® today announced the launch of the iTunes Store® in Russia, Turkey, India, South Africa and 52 additional countries featuring an incredible selection of local and international music from all the major labels and thousands of independent labels. The iTunes Store features local artists including Elka in Russia, Sezen Aksu in Turkey, AR Rahman in India, and Zahara in South Africa, international artists including The Beatles, Taylor Swift and Coldplay, and world-renowned classical musicians including Lang Lang, Yo Yo Ma and Yuja Wang. Customers can choose from over 20 million songs available to purchase and download on the iTunes Store.

The iTunes Store is available in 119 countries and is the best way for iPhone®, iPad®, iPod®, Mac® and PC users to legally discover, purchase and download music online. […]

Customers also have access to the revolutionary App Store℠ with more than 700,000 apps available in 155 countries.

I find it weird that India and Russia have just now received the iTunes Store. Now they have one more place to spend their money.

After waiting a few days to let others seek out bugs that squeaked through, I have finally updated to iTunes 11. 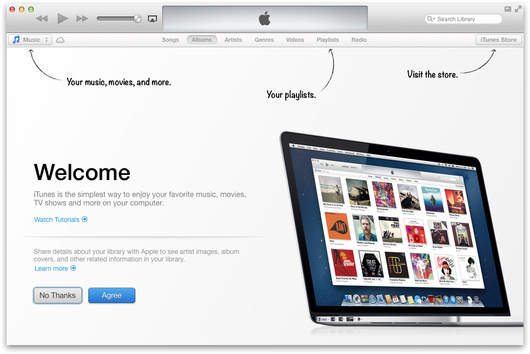 What I found interesting was how the welcome screen presented me with two questions:

While I am happy they are asking my permission before accessing my personal library for information (and even defaulting to “No Thanks”), I have to wonder why they made a tutorial. The interface is rather refreshing and considerably easier to use in comparison to previous versions.

I watched both tutorials—out of curiosity—and found them to be short (both under three-minutes each) and concise. Still, I wish I had those ~five-minutes back.

Bloomberg Claims iTunes 11 Is an Overhaul

Apple will unveil the changes by year’s end, said the people, who asked not to be identified because the plans aren’t public. The company will more closely integrate its iCloud file- storage service with iTunes so users can more seamlessly access and manage their music, videos and downloaded software apps across different Apple gadgets, the people said. Apple also plans new features for sharing music, the people said.

This is very interesting. If true, it makes me wonder how much better the iTunes experience will become.

[…] I am not saying this strangeness means we messed up - at least if we did so did Real and Pressplay and Musicnet and basically everyone else.

Now that Jobs has done it we need to move fast to get somethlng where the UI and Rights are as good.

However I think we need some plan to prove that even though Jobs has us a bit flat footed again we move quick and both match and do stuff better. […]

This e-mail reminds me of the WWDC 2004 banners proclaiming “Redmond, start your photocopiers.” It’s nice to see Bill realize they missed the boat, and that they need to catch up, but where is the drive to push out a service that beats Apple’s latest offering? Phrases like “we need to move fast to get somethlng where the UI and Rights are as good” only reaffirm that Microsoft—at that time—was still content with mimicking rather than rethinking.